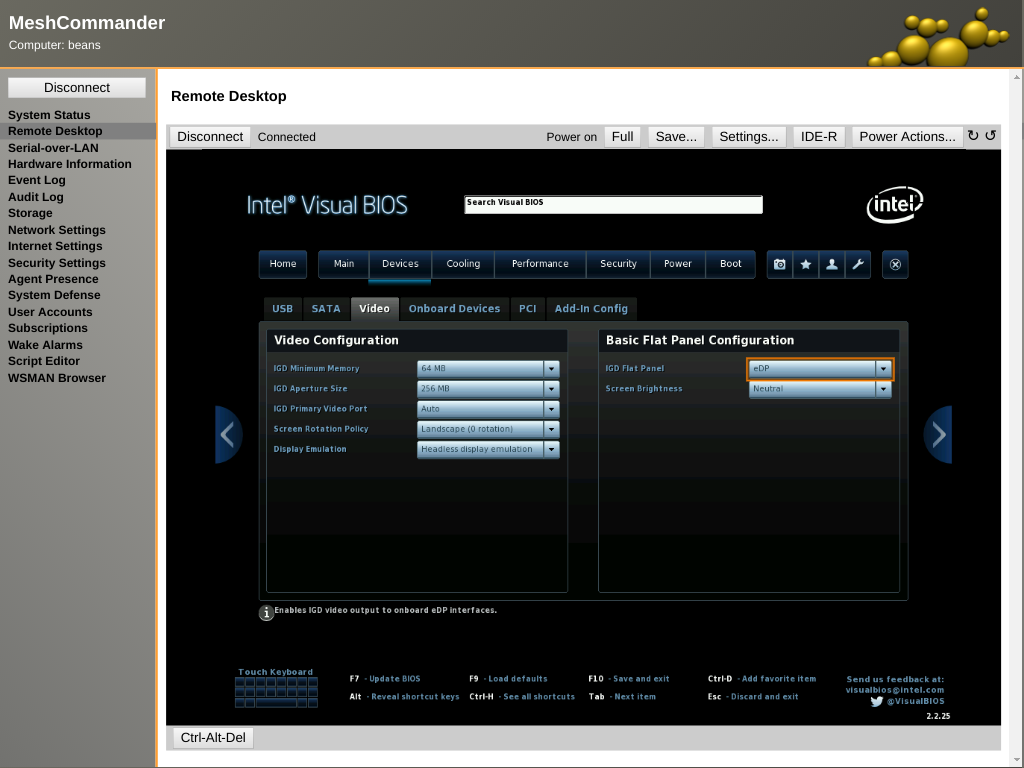 We also found that if we attempted to use the meshcommander web interface to power our NUC directly to the BIOS, we could only view the screen in a VNC connection if a USB keyboard/mouse was physically connected to the system. While we were unable to find a BIOS setting to address this issue, we did find a suitable work around. Instead of issuing a command to powering up directly to the BIOS, we did the following:

We found that VNC communications used by the AMT interface for remote desktop applications is not widely supported. The VNC client in the meshcommander web interface had no problem. Neither did the RealVNC Google Chrome extension. But, the tigervnc client that comes with Fedora would not work.

The out of band serial port services provided by AMT on our NUC had limited benefit.

If you want to make use of the AMT serial port on an NST or Fedora based Linux system, you will first need to find out what serial device the AMT port is mapped to.

The output above indicates that our NUC has two serial ports ttyS0 and ttyS4. Experience and Google searches lead us to believe that ttyS0 is a real serial port available on the NUC whereas ttyS4 is the virtual AMT serial port. To enable and start a serial port connection on this port (without system messages being logged), we can use the following commands:

As far as we know, you must set the serial port speed to 115200 for the AMT serial port.

Also, if you have previously enabled the serial port via systemctl, you should disable it now as the kernel will set it up for you:

For NST systems, you can enable this in the NST boot options by setting the NST_SERIAL options the /etc/nst/grub2/nst_grub2_defaults file. For example, the following changes to the NST Console boot entry enable a serial console connected to the AMT serial port (/dev/ttyS4):

Though it may sound backwards, enabling the graphical boot feature in your grub configuration will speed up the boot time. This is due to the fact that the scrolling of output on the console during boot is extremely slow. To enable graphical boot, make sure that your kernel boot line contains rhgb. For example, the following enabled graphical boot, but goes to a non-graphical console mode once the boot process is complete (systemd.unit=multi-user.target).

For NST systems, you can enable this in the NST boot options by setting the NST_GRAPHICAL_BOOT[idx] options to true in the /etc/nst/grub2/nst_grub2_defaults file. For example:

Note: On a Windows platform one can install MeshCommander using the MSI installer.

The amtterm package is available in Fedora, to install:

The wsmancli package provides provides the wsman and wseventmgr utilities that can be used to query and monitor AMT based systems. To install: